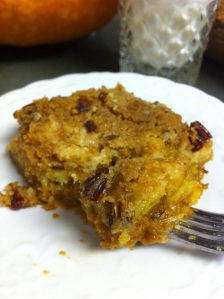 Tonight I was making a meal for some friends who lost a loved one and was trying to come up with a quick and easy dessert. I remembered I had seen another friend on Facebook post a picture of a pumpkin dump cake they had made. I knew we had some canned pumpkin and a yellow cake mix in the cabinet, which sealed the deal in my mind. The only problem was that I only had a large can of pumpkin puree and so I had to double the recipe {such I problem I know…I had to make one for ourselves along with the one that we were giving away}. Man…oh…man! Am I ever glad that I had that extra pumpkin!!

I am not usually a “dump cake” fan, but this dessert won me over to the dump-cake side. If you aren’t familiar with what a dump cake is, pretty much it is an unprepared box of cake mix with a couple of cans of fruit dumped in and melted butter. Place in the oven, bake and then eat. Easy peasy, but in my opinion many times lacking in flavor and character. This dessert is not lacking the easy-peasiness {just go with me on the word…}, flavor or character. Absolutely de-lish.

I have been accustomed to cooking and baking with coconut milk since we have had a daughter with a dairy allergy {have I mentioned that we found out this past month that it seems she has outgrown it?! Ha-le-lu-jah…thank you Jesus! This really was an answer to prayer}. Anyway, since I have substituted coconut milk in just about everything I have baked, I found out a couple of years ago that canned coconut milk is just completely awesome to use in Coconut Milk Pumpkin Pie. Hands down – we all prefer it to the evaporated milk version that was the norm in my grandma’s recipe. Because I know that the flavors go so well together that is what I decided to make this with tonight. I didn’t make the cake completely dairy-free, but could have easily done so by substituting melted coconut oil for the melted butter. I was running a little low on the coconut oil though, so I opted to use good ol’ butter instead.

I am sure there are literally thousands of these type of recipes floating around out there, but the post that I saw that my version is adapted from was found at www.cookiesandcups.com. So, if you are looking for an easy and flavor-packed fall dessert please try out this Pumpkin Coconut Milk Dump Cake and let me know how you like it! Enjoy! -Shelley.

In a mixing bowl stir pumpkin pie spice into the pumpkin puree. Whisk in the eggs and brown sugar until well combined and then whisk in coconut milk well.

Place baking dish in oven and bake 45-50 minutes or until the center is set and the edges are starting to brown. Let cool for just a bit before cutting and serving. Enjoy! 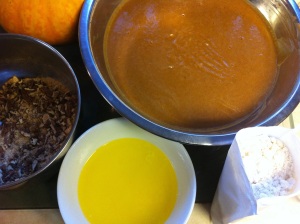 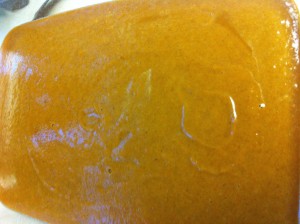 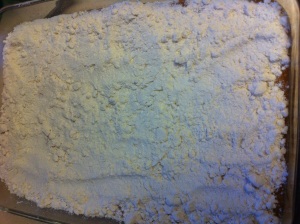 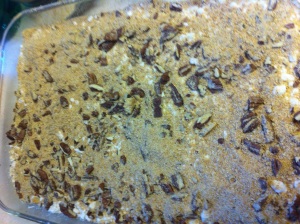 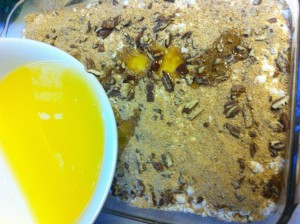 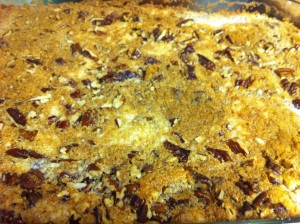 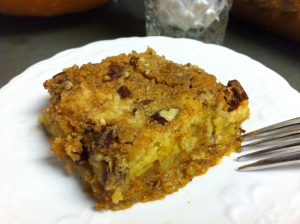 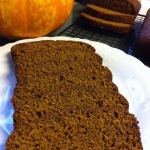