Egg free / For the Holidays! / Fresh Produce / Goodness on the Side! / Savory and Splendid! / Snacks

Tonight we are going to the Super Bowl. I was trying to think of something to bring and I thought of the “green sauce” {which is what the co-workers from my old job so affectionately call it.} Pretty much, it is just a very tasty jalapeno dip. You can put it on tacos, put it on the side of your plate with dinner, or just eat it with chips like salsa…or better yet with chips and salsa!

I have made this quite a few times. One time I made it and left all of the seeds in the peppers and it wasn’t very spicy at all. The next time that I made it, because of the success of the first time, I made it exactly the same and it was over-the-top-there-is-no-way-at-all-I-will-be-able-to-eat-this-stuff-because-it-was-so-so-so-hot-and-spicy! It was barely tolerable even after diluting part of it with a whole chunk of cream cheese and a whole tub of sour cream. It was spicy!

I have since learned to take all of the seeds out and, if needed, add some at the end of the blending process if you want a little extra kick. If you are a very brave person, or just like incredibly hot and spicy things, by all means skip the step of taking the seeds and throw the fried peppers in your blender whole! More power to you!

You will see the pictures of the process of making the dip. Overall it is pretty easy. You will notice that I wore rubber gloves to avoid getting the spice from the peppers on my hands. I have learned the hard way that you will want to do this as well…take my word on it!

So, I will stop writing now and share the recipe. I hope you will enjoy! -Shelley.

15 large jalapenos {They were pretty large peppers…bigger than I normally see…maybe twice the size of “normal” jalapeno peppers}
4 t chicken bouillon powder
2 medium-sized limes – juiced
6 cloves garlic – fried in oil {you don’t have to fry them in oil if you don’t want to, but I did…It give more of a “roasted garlic” taste}
1 handful cilantro – washed and roughly chopped
oil for frying
1 – 16 oz tub of sour cream to “dilute” dip {optional – this is for the people who are spice weenies! ;)}

First, I strongly advise to put on a pair of rubber gloves. Wash and dry peppers. Cut the stem off of the end of the peppers. 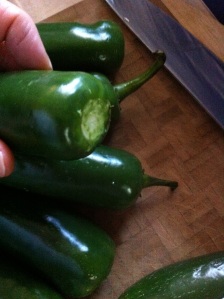 In a skillet heat on medium-high heat about 1/4″ – 1/2″ of oil in the bottom of the pan. When the oil is hot, add the peppers. Turn when the skin on the peppers split/bubbled/browned a bit. 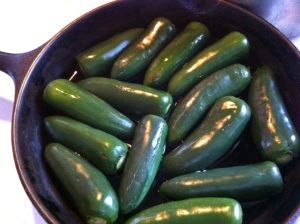 Once the peppers are cooked all of the way around, place them on a plate to cool a little bit. 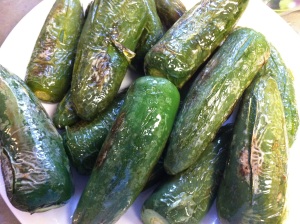 In the meantime turn the oil to med-low heat, throw the peeled garlic cloves in the hot oil and cook for a couple of minutes to soften and release some of the flavors. Take out and set aside.

Once the peppers have cooled enough to handle {while still wearing your gloves}, cut pepper in half to remove seeds. Run a small knife underneath the seeds to scrape off.

Place peppers in a blender. Remember…if you are really brave and like REALLY spicy things, you can skip the previous “seed-taking-out” step and throw the peppers whole in a blender! For the sake of other people who might not be as enthusiastic about spiciness and who might want to enjoy the dip as well, I don’t recommend it though! 😉

Start to blend… {please excuse my father-in-law’s blender that has no lid. It has been missing a long time…but the blender still works wonderfully!}

Take some of the oil that you used to fry and add to the blender…just enough to let all of the ingredients mix freely together. I used all that was in this bowl.

At this point taste your dip. If it needs more seasoning, add it and blend up again. You can transfer your dip to a serving container and eat as is….or move on to the next step if it is too spicy for your liking.

Update: After my husband had some of the dip this time, he said the consistency wasn’t as “smooth” as I have made it in the past. If you blend it even longer, it gets to be a creamy consistency on it’s own. I will have to remedy that for next time! I thought it was worth noting for …well notes sake I guess!

Empty container of sour cream into a mixing bowl…

I left some of the green sauce out for those who like it spicier, and blended the majority of it with the sour cream to tame it down.

You can use this as a layer in a 7-layer dip, a topping for tacos or have on hand as a condiment for whatever meal you want to eat it with! I like it with chips and salsa. This really is a great recipe. Whether you call it jalapeno dip, or green sauce I hope you will truly enjoy it!