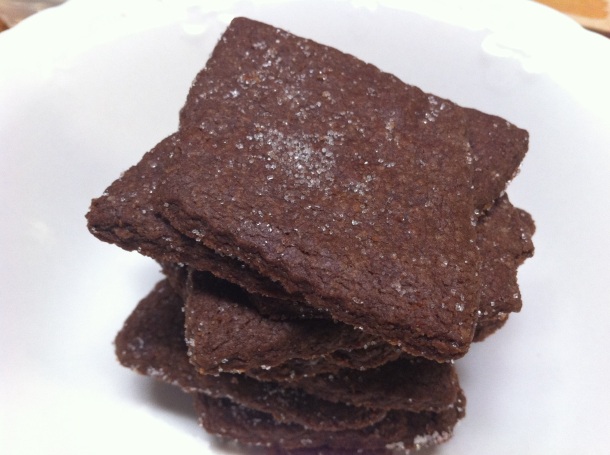 Since my recent post of making homemade Wheat Thin – type crackers, I have been thinking about other cracker-making possibilities. I saw a pin on Pinterest the other day for homemade graham crackers, but I was feeling a little more like chocolate today. I ended up looking at about 10 or so recipes online for chocolate graham crackers. Most of them used butter and/or milk. I ended up getting a basic idea for a recipe and making my own up. None of the recipes I read added vanilla {who makes a cookie without vanilla??! Craziness…I tell you.} I added vanilla. All of them that I saw used part whole wheat and part All-Purpose flour. I don’t have any AP flour in the house at the moment, so I used all whole wheat flour. I also used coconut oil in replace of butter and egg and vanilla as my liquid. The finished product was good!

First, the next time I make these crackers, I think I will use some AP flour in the recipe. I think it will make it easier to roll out the dough. It seemed to break apart/crumble pretty easily, but because of the oil/moisture in the dough I could easily squish it back together. I think adding the AP flour would help with this.

My second note on this is that I would not refrigerate the dough, if you can help it. I rolled out my first dough ball right away and that worked well. I put plastic wrap on the other dough and refrigerated to roll out later. It became rock hard after refrigeration so I let it warm back up, but it still crumbled apart easier than my first batch. I had to “knead” it quite a few times with my hands to re-melt the coconut oil in the dough to hold it together. I really would have preferred not to “work with” the dough quite so much. I would, however, still cover your other dough ball in plastic wrap while you roll out the first batch to maintain the moisture content in the dough.

Lastly, because I noticed the dough did dry out quite easily {after cutting the cookie shapes out, the excess dough that you would want to re-roll-out was too dry to do so}. I just wet my hands a little bit and squished it all back together and that worked nicely to roll back out. I didn’t want to waste all of that dough!

I know that sounds like a lot of “tips” {and maybe for some of you too much of a hassle} to be a good recipe. I was a little afraid that the finished cracker would crumble apart in the same manner that my dried-out dough had a tendency to do…but that didn’t happen at all! In the end it worked out alright and I have a nice crunchy, chocolately treat that my daughter, who is allergic to dairy, can enjoy along with the rest of the family {and trust me that “chocolaty” part doesn’t happen all too often}!

We now have a snack in the house that my whole family will gobble up. Dairy free, whole grain and delish! I cut some of them in larger crackers, and some of them in smaller pieces…perfect for little fingers.

Actually, what I am dreaming about is slathering some crackers up with Nutella, topping with marshmallow and making one amazing s’more {or two…or three…}. Mmmm….That might be for another day though. For now, I will let you read the recipe! -Shelley.

Cut in coconut oil with fork or pastry cutter until crumbly.

In a separate small bowl, whisk together egg and vanilla.

Add to flour mixture and mix until well combined. If the dough seems a little too dry {where it won’t squish and hold together well} add water 1 T at a time and mix until you reach the desired consistency.

Divide dough in half and shape into two balls. Cover one ball with plastic wrap until ready to roll out.

Place on cookie sheet and bake approximately 15 minutes, or until done.

If you want, you can sprinkle sugar on the crackers half way through the baking time.

Take out, let cool and enjoy! Once the crackers are cooled, they can be stored in an air tight container or ziplock and will keep for a few days. 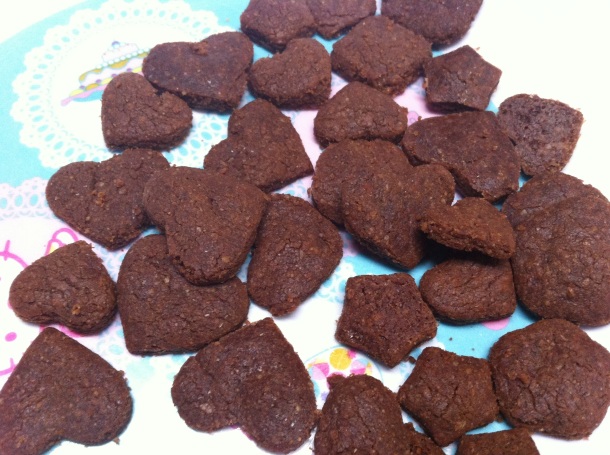